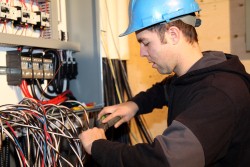 WorkSafe ACT is taking a unique approach to educating the state’s youngest and most vulnerable workers on the importance of work health and safety.

Mark McCabe, ACT Work Safety commissioner, has announced the launch of the Hazardman project, which aims to engage young workers and get them thinking about workplace safety.

The project revolves around the fictional character of Hazardman, who appears in a series of educational resources such as comics and fact sheets. It highlights the dangers posed by Hazardman’s ‘villains’, represented by common workplace hazards.

“This project is a fresh and original approach to a topic which is often overlooked or considered dull or unimportant,” Mr McCabe said in an October 28 statement.

“We cannot afford for the importance of safety to be devalued or under-estimated and the ACT Government is committed to making sure it stays on the agenda.”

WorkSafe cited several concerning statistics which prove the need to provide better OHS education for young and vulnerable workers. It pointed out that workers aged between 15 and 24 have the highest rate of work injuries per hour worked.

These young workers were most likely to sustain their injury as a result of manual handling and falls, including slips and trips.

Another goal of the project is to encourage workers to take a proactive approach to dealing with workplace hazards, such as discussing them with supervisors. In addition to school students, the initial focus of the project is to centre around young workers in the construction, retail and hospitality sectors.

If you have young people working at, or about to enter, your workplace, initiatives such as Hazardman will offer a welcome helping hand in ensuring they stay safe.

In addition to fun and light-hearted tactics, it is of course also important to invest in comprehensive occupational health and safety courses. These will enable your young employees to start work with the know-how to look after themselves and others.