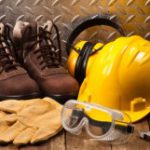 Nearly everything in her home can result in  Leslie Dyson’s hands, arms and legs breaking out painful rashes and lumps.

The mother of four, now suffers from allergic dermatitis  (and probably will for the rest of her life) as a result of her working as a process worker for a Perth company which required her to electroplate metals with chemicals.

When she stopped working a year ago — and when the company agreed to pay her workers’ compensation– skin had been peeling off her eye lids, cheeks, stomach, and anywhere else you could imagine.

She was forced to use a steroid cream every day to attempt to avoid flare-ups of the rashes that often last for months.

Dyson said she was exposed to a range of chemicals including tantalum chloride, pentanol, ruthenium chloride, hexachloroiridate solution and, to a lesser extent, epoxy, nickel and cobalt. Now, even water can result in a horrible rash.

Dyson alleges that her employer failed to provide her with the proper protective clothing and only gave her yellow dishwashing gloves.

“It wasn’t until I saw a specialist and showed him what gloves we were using that he found out we should’ve been using rubberised gloves that don’t seep,” she said.

She resented that she had to investigate the safety of the chemicals she was working with, instead of the onus being on her employer.

Mr Schneider said people worried about their exposure to chemicals should contact WorkSafe.