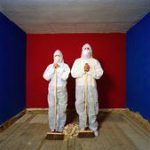 Torquay residents are concerned about an apparent asbestos dump west of the township near Spring Creek.

It is believed the asbestos is in soil used as fill and brought in from elsewhere.

Resident Kim Hammond said she noticed men wearing white suits working in the valley opposite her house a few months ago in an area earmarked for subdivision.

She said she had spoken to the Environment Protection Authority, which said it was a Worksafe responsibility. She had also spoken to Surf Coast Shire.

Ms Hammond said Worksafe had advised her the asbestos was being removed in the proper manner.

“The EPA, Worksafe and the shire have all wiped their hands of it pretty much, and they are saying the responsibility is with the developer, Ironbridge Property Developments,” she said.

“I have sent them emails, and I have been promised a response, but they’re a mob in WA.

“I have seen kids playing on that site all weekend, people running through it, walking over it, and it’s everywhere. There’s a lot of it, not just little bits.

“I am frustrated because there’s no protection for the public even throughout the process of removal. All we had to do was hope they were complying.”

Ms Hammond said she had the asbestos tested, and it was found that there were two types of the material.

The tests were carried out by Environmental Health Solutions of Geelong West.

Andy Betz, of EHS, said the two samples of material supplied to the laboratory for identification were of two types of asbestos, chrysotile and amosite, known as white and brown asbestos.

Mr Betz said the two samples were in the form of cement sheeting, and were therefore not considered friable, which meant it could not be crumbled in one’s hands and was less dangerous.

It is believed Worksafe also confirmed the asbestos at the site as non-friable.

Surf Coast Shire Council has said it is not the shire’s area of responsibility.

A spokeswoman for the EPA said the authority was aware of the worksite and that Worksafe was keeping an eye on it but not transporting or disposing of material from the site.

A spokesman for the developers asked Ms Hammond not to interfere “with something that has already been dealt with in the appropriate manner”.

“I refer you to our previous email and confirm that everything possible has been dealt with in the appropriate manner,” he said.