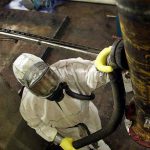 Veteran cinema operator Cyril Watson and his lawyer had reportedly sent a letter to the agents for the landlord pleading for urgent attention to waterproof the roof and  “safeguard and suppress the asbestos materials used in the roof”. The matters had been discussed early in a face-to-face meeting last November.

One of the improvement notice called the the cinema out for breaching  Occupational Safety and Health Regulations  by failing to have an asbestos register. Watson has been until August 9 to conduct an identification and risk assessment on the asbestos and to record all data at an onsite register.

“Since that time we have had preliminary plans prepared by the conservation architect for the arcade and theatre to understand what can and cannot be done to the building. In respect of the asbestos roof … sheet asbestos roofing is a stable form of asbestos in particular when painted. Many schools in WA have this form of roofing. That is not to say we will not be replacing it when we renovate the arcade, but it is not at the point where it should be replaced immediately.”

But WA Asbestos Diseases Society president Robert Vojakovic called on the health department for urgent attention and to investigate the issues in order to ease the minds of patrons and workers alike.

Mr Vojakovic  upon seeing photos, described the site as being in a very poor state and appeared to be “friable” in places. “If the dust can reach the cinema then there is a risk,” he said. “The Department of Health or Perth City Council need to have a look at the situation. It’s a public facility; it must be free of risk.”

Roof plumber Rick Rogers, discussed the condition of the cinema stating”It is in poor condition, it’s quite flaky,” he said. “My old man died of asbestosis at 48. You are talking to a guy who is pretty paranoid.”

A Worksafe spokeswoman said inspectors didn’t see any cause for concern on the inside of the cinema because the asbestos roof is on the outside of the building.

A Department of Health spokeswoman said its officials were unaware of any issues at the Piccadilly. “Issues regarding the management of asbestos in the workplace should be directed to the Department of Commerce (WorkSafe WA),” she said. “When required, the department will assist WorkSafe by providing toxicology advice and public health risk assessments.”