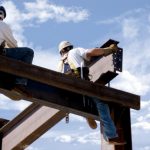 A middle-aged construction worker has died after falling approximately three metres from scaffolding. According to the Police, the Green Valley worker fell at the Sydney building site on the corner of Pitt Street and Campbell street. He died upon the arrival of emergency services.

Brian Parker said the accident affected him on a personal level because he knew the worker who died in the accident.  Parker has extended his condolences to the family. Work on the site has been halted  until a full investigation into the accident has been completed. The ambulance workers were not able to say whether the worker had a heart attack prior to the Working at Heights accident.