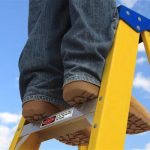 A 20-year old Canberra apprentice is fighting to survive after a workplace accident at the old bus depot in Phillip.

The apprentice electrician has reportedly suffered serious head injuries after he received electric shock  causing him to fall five metres from a ladder.
He was working for a contractor on behalf of the ACT government to perform maintenance on the site.
Since the accident, the worker has undergone two surgical procedures at a Canberra Hospital. WorkSafe are currently inquiring about the incident.
Interestingly, the accident occurred the same day as approximately 600 construction workers marched on the Legislative Assembly in protest of the territory’s recent work safety record which has seen four workplace deaths in the state in less than a year.

Officials from the apprentice’s union are angry over longstanding concerns of declining safety records.Electrical Trades Union official Mick Koppie believes that WorkSafe is being worked above its capacity. Koppie believes the safety regime is overstretched and

Chief Minister Katy Gallagher believes the incident highlights the need for a reform of workplace safety laws or at least rigorously enforced.ACT Work Safety Commissioner Mark McCabe said the incident displayed a need for vigilance on the sides of both workers and employers.

”I am saddened to learn of the incident that occurred [on Tuesday] and it proves that dangers lurk in every workplace,” Mr McCabe said.