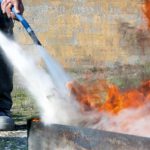 A Desalination company and its operator were subject to an $80 000 fine for an explosion that destroyed a Morphett Vale house.

Prospect Building Services and its  Harry Twarowski  pleaded guilty in the Industrial Court over the 2009 explosion.

The company was in operation for three decades without incident prior to the explosion which they admitted was a result of failing to provide a safe working environment to an employee. The employee in question had drilled through bricks on the home in order fill homes with a solvent-based fluid to treat salt damp.

However, the employee failed to turn off the home’s gas hot water service which caught on fire and caused a massive explosion upon coming into contact with the liquids vapours.

Industrial Magistrate Michael Ardlie called it  “sheer luck” that no was one harmed especially the 88 year old World War Two veteran who occupied the house.

Mr Ardlie said the explosion could have easily been avoided.

“The measures that should have been taken and were reasonably practicable were straight forward and simple,” Mr Ardlie found.

“The employee should have been educated as to the hazards imposed by the use of the solvent.”

The company and Mr Twarowski were fined $68,000 and $8,500 respectively and ordered to pay $500 compensation for medical treatment incurred by the occupant’s son.