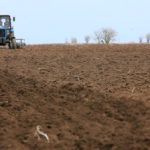 A Robinvale man  was killed during an occupational health and safety accident at Wemen almond farm this week. The man is believed to have been killed after becoming caught beneath a slasher at the Annuello Wemen road farm.

However, WorkSafe Victoria later revealed the man was operating a tractor which they believe ran him over when he climbed down from the vehicle.

A spokeswoman said WorkSafe  will be conducting an investigation into the workplace death.

Ambulance Victoria media spokesman John Mullen said paramedics were called at 8.26am, but the man had already succumbed to his injuries when they arrived.

“Above all else, our thoughts and condolences are with the man’s family, friends and colleagues at this very difficult time,” Mr Dall’Alba said.

“We are doing everything we can to determine the cause of this tragic accident.”

Mr Dall’Alba said the company closed the farm down immediately after the incident, and will be offering counselling and pastoral care the the man’s family,colleagues and staff.

“I want to assure you of our company’s commitment to safety and providing a safe environment for all of our employees,” he said.

“The Annuello farm will remain closed until consultation with all stakeholders is complete.”

The incident is Victoria’s third workplace death in eight days, following the deaths of a carpenter and an electrician earlier in the week.