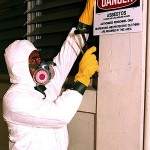 The State Government has stated that air quality monitoring on asbestos removal projects, will remain mandatory for an additional year.Industrial Relations Minister, Russel Wortley, after undergoing the pressure of lobby groups, has stated that the current rules would remain for period of 12 months.

South Australia will (over the next year) lobby for the mandatory air-monitoring for “Class- B removals”, in the harmonized occupational health and safety regulations. Wortley has stated that the decision of the government is a response to the concerns of industry affiliates and stakeholders.The asbestos that will require air-quality monitoring is the non-friable type of asbestos. Non-friable asbestos is commonly found in solid material and cannot be crushed manually when in a dry state.

Andrew Butler, a committee chairman for Steering, went on record to say that the 12-month transitional period to uphold air-quality monitoring is a significant improvement .There are concerns that dropping the mandatory monitoring would risk exposing workers to the deadly substance and subsequently, exposing them to a deadly disease. Wortley asserted in a conference, that diseases related to asbestos exposure continues to kill hundreds of Australians each year and plagues thousands of them with symptoms. No indication yet on if the air-quality monitoring will be a permanent addition to the harmonised laws.