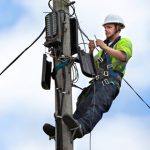 A 22 year old worker was hospitalized following an construction accident in Canberra.

The worker suffered chest injuries resulting from his falling five metres from an internal shaft at the Nishi Apartments in New Acton.

Ambulance paramedics treated him prior to being taken to Canberra Hospital, where he is currently in stable condition. Over 300 construction workers were informed that they will not be able to return to work until the safety issues are dealt with. WorkSafe ACT designated an exclusion zone around the construction site until it can be properly investigated. Originally just the accident site was roped-off but

Dean Hall from CFMEU said “When you have an accident like this on a building site, what you find is that a lot of workers come forward with concerns they’ve had,” he said.

“We’ve had a number of them approach us already with some pretty serious concerns and allegations.

“We’ve given them the undertaking that we’ll work with management to resolve those, and the site will not go back to work until that takes place.”